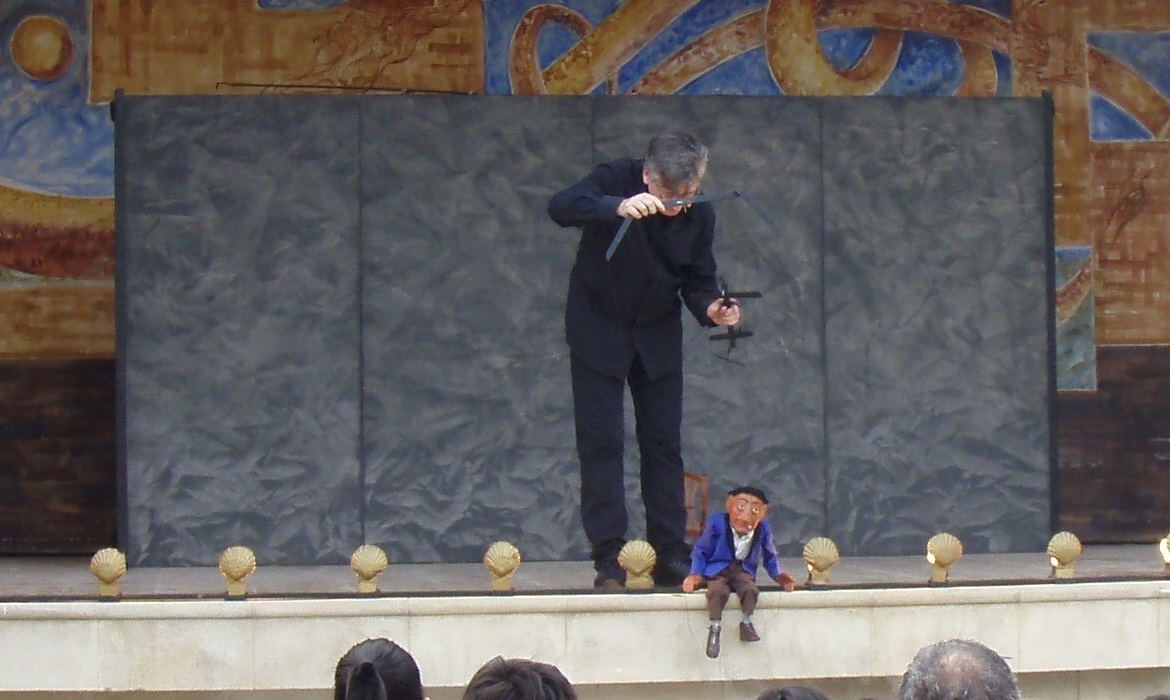 We are a Catalan company entirely dedicated to the puppet, string-puppet and object theatres.
Our extensive experience allows us to deal with each new creation, in all production areas.
We work everywhere, being highly valued internationally; having received Awards and recognitions and participated by the moment at about 300 theatre festivals spreads over 24 countries in 4 continents, and performed in 6 different languages.

Carles Cañellas, professional puppeteer since 1976, Dean of the Catalan and Spanish string-puppeteers, considered by the international critics among the most skilled in Europe, founded Els Rocamora (now Rocamora Teatre) in 1982, while he lived and worked in Italy, after having been a member of the groups of Barcelona: T.I.Z. (1974-76), Grupo-Taller de Marionetas (1976-78), Col·lectiu d’Animació de Barcelona (1978-80) and the circus Circ-Cric (1980-81). Lecturer at the Theatre Institute of Barcelona, Academic Year 2005-06. Director of the Festival de Titelles del Moianès and Espai Animacions, puppetry initiatives center.
In 1987 joins the Company Susanna Rodriguez, puppeteer, ex dancer of the contemporary dance Companies: Taba (1982-86), Saez-Taba (1986-87) and Trànsit (1988-89).

(2016) IDENTITATS  Medium-format show for one actor, one string-puppet and six masks. Without words. The purest essence of the Marionette, takes us into an exciting and surprising dramatic search for its own existence, which evolves under various contemporary choreographies, with electronic music, light environments and video backgrounds, custom made.

(2010) OLIU, THE LITTLE WOODCUTTER Medium-format show for two actors, shadow effects and six top rod puppets. In dreams everybody can make reality their desires. Behold, a child is afraid that one day his parents separate. A story within a tale… and a tale within a story.

(2005) EL RETABLO DE MAESE PEDRO Co production with Mercè Framis and L’Auditori of Barcelona. Staging for shadow theater of the work of Manuel de Falla, on the occasion by the opening concert of the Year of the Book and the Reading, performed by the Jove Orquestra Nacional de Catalunya (National Youth Orchestra of Catalonia), under the baton of Maestro Manel Valdivieso and the participation of two opera singers and one actor.

(2002) SEARCHING THE SUN Medium-format show for two actors and puppets of different techniques, the main one the top rod puppet. Based on a traditional Chinese tale. Co production with Biel Porcel and Binixiflat Teatre. Created in collaboration with the NGO “Veterinarians Without Borders” (Spain).

(2002) THE NEW CLOTHES Medium-format show for two actors, masks and sixteen puppets of different techniques, the main one the marionette. Free adaptation of H. C. Andersen’s tale “The Emperor’s New Clothes”, with its own content like the migration, the labour exploitation, the Fair trade.

(2000) SMALL SUICIDES Small-format show for an actor and quantity of animated objects. In English. Recreation in collaboration with the author of the surprising spectacle “PICCOLI SUICIDI (tre brevi esorcismi d’uso quotidiano)” that Gyula Molnár created and performed by halfway around the world with great success. A classic play of the Object Theater and cult piece among the experts.

(1997) SOLOIST Festive show of medium format for one actor and six string-puppets. In English. Seven funny, poetic, surprising stories, with a common spirit: the verisimilitude of real life of the marionettes.

(1993) AUBUSTER Exciting work with string-puppets, without words. Comic metaphor about the journey through life, from “birth” till the encounter with “death”.

(1990) EL PERSEGUIDOR Co production with Festival de Tardor of Barcelona, Fira de Teatre of Tàrrega and Teatre Obert. Dramatization for actors, objects and puppets of the story by Julio Cortázar.

(1989) RULETA RUSSA Product of studio work with the playwright José Sanchis Sinisterra are the six monologues that make up this experimental piece for actors, which proposes a risky exercise over the different modalities of the monologue. A reflection about the expression forms of the theatrical language.

(1988) FENÒMENS Collection of sketches and gags made with string-puppets for the TV Show “filiprim” by Josep Maria Bachs on TV3 (Catalonian public channel), with whom we have participated also in the programs “Dicciopinta” and “La Parada“.

(1985) AIR MAIL Audacious production staging as complex as attractive, inspired by the movies, novels and comics of American B-series comics. Acknowledged by audiences and critics, domestic and foreign, as a capital piece of Puppet Theater.

(1982) LA MALETA Following the style that we started in the Col • lectiu d’Animació, actors and puppets act together, creating humorous and unbelievable situations. More than 500 performances at festivals and theater circuits of 9 countries.