La Cubana is a Catalan theatre company with a history spanning over 35 years. It was established in Sitges 1980 by Vicky Plana and Jordi Milán (the current director).

Its theatre style is based on observation, recreating theatrical situations from daily experiences, always looking for the humorous point of view that usually goes unnoticed as theatre. The theatre created is based on small and simple ideas; a dialogue with the audience. It is hand crafted theatre.

In all their work the same constants are repeated, such as the transgression of spaces, surprise, the game as a theatrical expression and, above all, its characters. Characters that have their own life, taking on their own shape, that goes beyond the script. Another quirk is audience participation: It is intended to put the audience, the main inspiration of the company, into the position of protagonist. They regard the theatre as “a whole”, from inception to delivery. They have created large shows, and small shows; they have been televised; have organized business conventions; premieres and have worked in advertising. They have used a number of contrasting venues as stage, from traditional theatres, to more unusual spaces, such as markets, churches, public transport and perhaps most naturally, the street, as the street has been their great school, and on which they have based all their experience.

Currently and after a tour of 30 cities throughout the Spanish State with the show Adéu Arturo (seen by more than 300,000 spectators) La Cubana celebrates its 40th birthday as a theater company. Both in Catalonia and throughout Spain, it has achieved a consolidation at the popular level thanks to its shows (5,000,000 viewers) and also thanks to its television interventions. 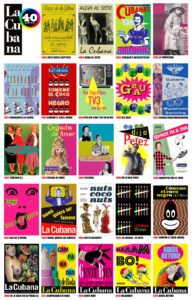