200 PERFORMANCES OF CIATRE COMPANIES CANCELED BY THE CORONAVIRUS

200 PERFORMANCES OF CIATRE COMPANIES CANCELED BY THE CORONAVIRUS

The world of culture is suffering the effect of the coronavirus and the performances that the theater and dance companies had to make in March and April have been canceled. This situation can be prolonged, since cancellations are already being announced for the months of May and June. Since the crisis began in mid-March, almost 200 CIATRE company performances have been canceled.

Our entity is working to mitigate, as far as possible, the serious effects of this stop. In fact, the association is holding conversations with all public administrations to establish the obligation to reschedule these performances when the situation improves. 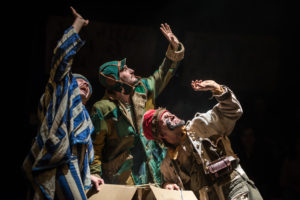 On the other hand, with the canceled shows, there are initiatives to keep the culture active, such as that of the company La Baldufa that proposes you to see its documentary 267 dies amb 3 pallassos, where you can discover the different creative phases of its latest show  Bye Bye Confetti.

To liven up the confinement, we also propose you to view the videos made in CIATRE Scenic Territory project, an initiative created to encourage and create new audiences: